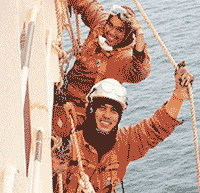 The portrait of a cargo-ship worker has changed since SCI began serving the Delaware Riverway in 1843.

Seamen often take jobs as seafarers to lift their families out of poverty. They are on-call as needed, and travel all over the globe to work in often unregulated conditions, with people they don’t know and who may not speak their language.

At sea for weeks at a time, theirs is a bleak world where no national laws rule, piracy still exists, and rogue waves can wash away life and limb. It’s no wonder these visitors are so grateful to see a friendly face and to enjoy some of the comforts of home.

A sense of adventure once drew men to the sea. Before containers and modern cargo-handling equipment, a seafarer could count on spending a week or two in one foreign seaport after another. Seafaring was a chance to see and learn about the world. Now ships are automated; the crews, smaller; the time in ports, shorter; the loneliness, more pronounced.

Seafarers usually work whenever they are offered a contract. One man described a year when he came home to his family after a nine-month tour only to be asked to go back to sea 18 days later for another nine-month contract. Leaving his wife crying at the dock, he felt he had no choice. If he refused the contract, there would be no telling if and when he would be hired again. Seafaring was all he knew, all many seafarers know.

Clothing is often an issue. Many seafarers come from tropical countries where they cannot even buy cold-weather garments. When they join a ship’s crew they often don’t know where it will go during their six months or more on board. Or they think they’ll be on a warm-weather route and then wind up in Philadelphia on a frigid winter day. And, from time to time, airlines lose the bags of seafarers who fly here to join a ship.

Many seafarers spend months at sea without going ashore. Tankers make round-trips from here to load at offshore terminals in Africa. Car ships come from distant points like Korea. Seafarers often have only a few hours ashore and are in a rush to go shopping, to buy snacks, clothing, or electronic gear that’s either not available or too expensive at home.

Most ships have at least three nationalities on the crew, and many have five or six different nationalities and cultures on their crews. About 40 percent of the seafarers we see are from the Philippines. Large numbers come from India, Russia, Greece, Ukraine, China, Latvia, Poland, Croatia, Romania and Myanmar (Burma).

If an on-board accident occurs, good medical care may be unavailable for many days, and death sometimes follows.

Many of the seafarers visiting SCI in Philadelphia are crewmen whose vessels have come under attack or been captured by pirates. The crew of the M.V. Irene E.M., who had previously visited SCI, was attacked in the middle of the night on April 14, 2009 and seized by Somali pirates. The 22 Filipino crew members had a few brief minutes between the alarm and the highjack. The crew were then held hostage for five months until they and their ship were ransomed for two million dollars.

Sometimes crews visiting the U.S. can be detained for months if the U.S. Justice Department considers them to be material witnesses to violations of international law. If they must testify in a court case, such as one about the dumping of oily bilge water into the ocean, they might wait months before working again, often isolated.

Such are the challenges facing the seafarer!