The MV Venta is a bulk carrier ship that first came into Port here in Philadelphia on June 30th. Three days later, we got word that the ship was being arrested due to owners’ non-payment of bills. 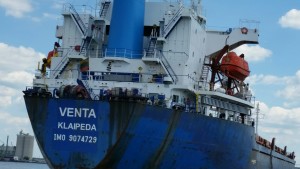 Money is owed to various vendors, the ship is in disrepair, and the seafarers on board haven’t been paid for 3 months. There are 20 men on board are all from Lithuania and only half of them have shore passes.

Because the owner has declared bankruptcy, they are trying to minimize costs and therefore the vessel is currently out at Anchorage so they don’t accumulate berthing costs. Legal proceedings are happening now to ensure the vendors get paid off, the seafarers get paid, and that the ship gets the repairs it needs.

We are working closely with the International Transport Workers Federation and the USCG to ensure the seafarers well-being. They have plenty of food to eat and water to drink, but we found out yesterday their air conditioning is not working.

On July 22nd, Fr. Stube and Fr. Lee took a launch boat out to the ship to visit the crew and drop off all the fans we collected. The crew was a little disheartened, but a visit from us seemed to help. Not to mention they were at least a little cooler! Many thanks go to: St. Luke’s Episcopal Church, Germantown, Trinity Episcopal Church, Ambler, All Hallow’s Episcopal Church, Wyncote, and Norton Lilly for the donation of the fans!

Our team returned on July 23rd, this time with some representatives from the International Transport Workers Federation. They are also involved with the situation, and now all the seafarers are under ITF contracts, which gives the organization the ability to protect their rights going forward. 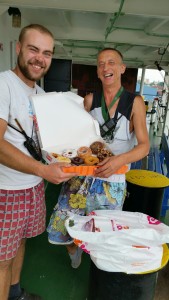 Over the weekend, the ship came into a terminal in Camden in order to unload some of the cargo they still had on board. This also gave us easier access to be able to visit them. Fr. Lee has been out every day this week. On Monday, the crew was saying they were craving donuts and on Tuesday, Fr. Lee delivered!

More information has also come to light regarding the financial situation of the company that owns the ship, Lithuanian Shipping Company. For a while it was looking as though they would be forced to file for bankruptcy. But on the 27th, they recieved a loan of 3 million Euros, stopping the bankruptcy proceedings. If you’re interested in learning more about the deal, click here.

It is still unclear what this loan means for the everyday lives of the seafarers on board the Venta, but no matter what comes, we will support them every step of the way!

The Venta has left the port of Philadelphia, bound for Montreal, Canada. The company’s financial situation has not been entirely resolved, but enough bills were paid for her to be on her way. We are expecting the crew to be repatriated to Lithuania upon arrival in Canada. We continue to work with ITF and the Seafarer’s Center in Montreal to ensure this happens.

Thank you all for your support of this vessel while it was here! The Lithuanian Community here in Philadelphia as well as Our Lady of Peace Catholic Church cooked some delicious meals for the crew over the last few weeks. We also want to thank Coleman Launch – every visit or food drop off was possible only because of their services.

We ask for your continued prayers for the crew as they head on their way!